A PERIODIC BULLETIN FROM LEGITIMATE LEADERSHIP 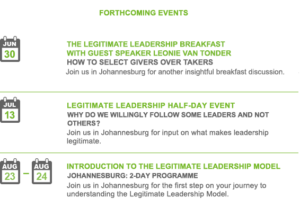 THE ESSENCE FROM THE SELECTING GIVERS OVER TAKERS BREAKFAST (JUNE 2016)

What were the essential messages which emerged from the recent Legitimate Leadership theme breakfast entitled Selecting Givers Over Takers?

Firstly, if you want an organisation where you have more givers than takers, then you need to have givers in charge. This is simply because givers beget givers. Whenever you appoint someone to a leadership role, therefore, it makes simple sense to appoint givers rather than takers.

CASE STUDY: CHANGING A DISTRIBUTION CENTRE FROM “I” TO “WE” – AND REAPING THE RESULTS

Action taken over the last three years fundamentally changed a PDC (parts distribution centre) of a South African company from an “I” to “we” facility.

It is generally thought that a typical unionised South African workforce won’t accept flexible work arrangements and achieves relatively poor productivity. But these notions are being decisively disproved at the PDC, partly because of the implementation of the Legitimate Leadership Model in the form of the Care and Growth Leadership programme and the Grow to Care programme.

ARTICLE: TOO LITTLE, TOO LATE – CORRECT LEADERSHIP ACTION WHEN IT’S NOT A MEANS, ABILITY, ACCOUNTABILITY OR EVEN A CAPABILITY ISSUE 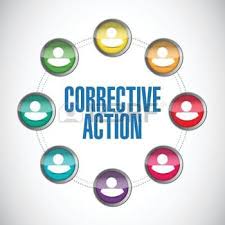 How do you handle a situation where an employee can technically do a job but simply does not “fit” with the rest of the team and the relationships are broken?

Almost any aspect of poor performance and dysfunction in people or teams can be diagnosed using the Legitimate Leadership Model.

The easy cases are where there are Means, Ability or Accountability issues.

ARTICLE: THE FIVE DYSFUNCTIONS OF A TEAM

Since 2012 Legitimate Leadership has been engaged with a client in South Africa to improve its leadership capability at all levels within its manufacturing function.

One of the client’s shift managers is enrolled with South Africa’s Gordon Institute of Business Science (University of Pretoria) on a Foundation Management Development Programme. As part of a section of the course entitled Creating High Performance Teams, the shift manager recently submitted an assignment entitled “The Five Dysfunctions of a Team”.

A core conclusion of his assignment is that avoidance of accountability and inappropriate intent are the greatest downfalls of leadership.

COMMENTARY ON THE SUBMITTED ASSIGNMENT BY WENDY LAMBOURNE OF LEGITIMATE LEADERSHIP: What this shift manager has understood and articulated so well is that the core criterion for success as a leader, at any level in the hierarchy, is intent. At the root of all the five team dysfunctions is the intent of the leader to get rather than to give.

It is just about impossible to talk about the really important stuff in politics without using terms that have become such awful clichés they make your eyes glaze over and are hard to even hear. One such term is “leader,” which all the big candidates use all the time — as in, for instance, “providing leadership,” “a proven leader,” “a new leader for a new century,” etc — and have reduced to such a platitude that it’s hard to try to think about what “leader” really means and whether indeed what today’s Young Voters want is a leader. The weird thing is that the word “leader” itself is cliché and boring, but when you come across somebody who actually is a real leader, that person isn’t cliché or boring at all; in fact he’s sort of the opposite of cliché and boring.

Obviously, a real leader isn’t just somebody who has ideas you agree with, nor is it just somebody you happen to believe is a good guy. Think about it. A real leader is somebody who, because of his own particular power and charisma and example, is able to inspire people, with “inspire” being used here in a serious and non-cliché way. A real leader can somehow get us to do certain things that deep down we think are good and want to be able to do but usually can’t get ourselves to do on our own. It’s a mysterious quality, hard to define, but we always know it when we see it, even as kids. You can probably remember seeing it in certain really great coaches, or teachers, or some extremely cool older kid you “looked up to” (interesting phrase) and wanted to be just like. Some of us remember seeing the quality as kids in a minister or rabbi, or a scoutmaster, or a parent, or a friend’s parent, or a supervisor in a summer job. And yes, all these are “authority figures,” but it’s a special kind of authority.

If you’ve ever spent time in the military, you know how incredibly easy it is to tell which of your superiors are real leaders and which aren’t, and how little rank has to do with it. A leader’s real “authority” is a power you voluntarily give him, and you grant him this authority not with resentment or resignation but happily; it feels right. Deep down, you almost always like how a real leader makes you feel, the way you find yourself working harder and pushing yourself and thinking in ways you couldn’t ever get to on your own.

In other words, a real leader is somebody who can help us overcome the limitations of our own individual laziness and selfishness and weakness and fear and get us to do better things than we can get ourselves to do on our own.

COMMENT BY WENDY LAMBOURNE OF LEGITIMATE LEADERSHIP: Legitimate leaders, individuals in positions of authority in organisations that people willingly follow, evince only two drops of essence: they have a sincere and genuine interest in those in their charge, and they are relentless in the pursuit of helping them realise the best in themselves. Legitimate power is not vague or arbitrary; it is very concrete and specific. Legitimate leaders care for and grow their people. What makes them leaders is their character, not their charisma.