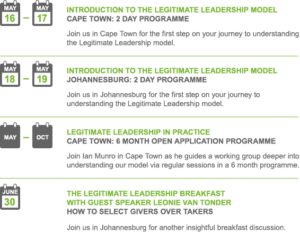 For more information on any of these events, please email:
events@legitimateleadership.com

In April 2016, Nothemba Mxenge, an associate with Legitimate Leadership, was the LeadSA (SA: South Africa) Hero of the Month.

LeadSA is an initiative backed and organised by major South African media houses to inspire “ordinary” South Africans to be active in “making a difference” – from making a stranger smile to furthering the rights entrenched in South Africa’s constitution.

One of LeadSA’s objectives is to highlight the stories of these people, and one of its projects is recognition, monthly, of a “LeadSA Hero of the Month”.

Candidates for the Lead SA Hero of the Month are nominated by members of the public, and each nominee’s story is then investigated.

Mxenge won the title for April 2016 because she initiated and helped execute a project called Coaches for Freedom.

Interviewed on Radio 702, Mxenge explained that in anticipation of Freedom Day in South Africa a group of recently-qualified coaches started the Coaches for Freedom initiative (see Mxenge’s article below).

Mxenge described coaching as “being able to hold someone safely and move them from where they are to where they want to be”. She said that this is in contrast to mentoring “which assumes that you have expertise and that the other person wants to walk the same path as you”.

“With coaching we don’t have to have that expertise. We need to hold the coachee so that they can use their own wisdom in solving their problems. Many people don’t know what to do next; sometimes they have the technical know-how but don’t have the courage, confidence or self-esteem to do it.”

Mxenge, has a degree in chemical engineering, an MBA and other qualifications. She has her own consultancy, Epiphany Coaching, and is an associate consultant with Legitimate Leadership. 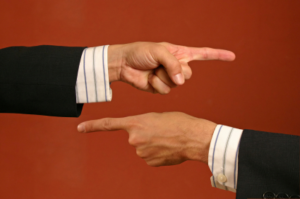 I have often asked managers in organisations why they do not hold their people accountable. They typically provide me with a list of reasons which fall neatly into the categories of Willing; Able; and Allowed. But a reason which is not given, and which I have come to believe is actually the primary reason why managers do not hold their people accountable, is that the managers have not clarified and agreed what each person is accountable for in the first place.

On 27 April 2016, South Africa’s Freedom Day, something extraordinary happened: a group of coaches gave four hours of their time to coach fellow South Africans. And what has transpired since then is an illustration of what happens when we give unconditionally.

CASE STUDY: A QUEST FOR BEHAVIOURAL SHIFT AT A BANK DEBT REVIEW CENTRE

A leading South African bank’s debt review centre has the purpose of rehabilitating customers who have defaulted and assisting them to avoid being blacklisted, regain their creditworthiness and re-join the credit market.

Early in 2015 the centre’s leadership took a number of steps to achieve this purpose. The steps included a project, with Legitimate Leadership, to maximise employee engagement by enabling leaders to examine their intent and make changes in relationships with their staff. But the project included a second, more unusual part: training of their staff to understand what is required of each of them to truly make a contribution to the organisation’s goals.

This dual approach – “from both ends” – improves the chances of the initial behavioural shift which typically occurs immediately after an intervention, taking permanent root.

VIDEO: RICARDO SEMLER TED TALK ON HOW TO RUN A COMPANY WITH (ALMOST) NO RULES

COMMENT ON THIS VIDEO BY WENDY LAMBOURNE, DIRECTOR, LEGITIMATE LEADERSHIP: Ricardo Semler is a Legitimate Leadership hero. Not for the multiplicity of excellent ideas which he has successfully implemented, but because he understands the key fear that people at work need to find the courage to rise above: the fear of losing control, of not having predictable outcomes. As Semler demonstrates, overcoming that fear is good for companies and, more importantly, for those who work in them. Overcoming that fear transforms work itself and hence those who work.

SUMMARY OF THE VIDEO:
One day I could be sitting in front of a doctor who says, “Ricardo … you have six months … to live.” You start thinking about what you would do with this time. And you say, “I’m going to spend more time with the kids. I’m going to visit these places, I’m going to go up and down mountains …”

But of course these will be very bittersweet memories.

So I resolved that every Monday and Thursday, I’m going use my “terminal days”.

When we examine how we distribute our lives, we realize that in the periods in which we have a lot of money, we have very little time. And then when we finally have time, we have neither the money nor the health.

We as a company have been thinking about that for the last 30 years. Ours is not a simple business: it has thousands of employees, hundreds of millions of dollars of business; it makes rocket fuel propellant systems, runs 4,000 ATMs in Brazil, and does income tax preparation for many thousands.

So we suggested to employees, instead of going mountain climbing when you’re 82, why don’t you do it next week? We’ll sell you back your Wednesdays for 10% of your salary. So now, if you were going to be a violinist, you go and do this on Wednesday.

We thought the older people would be really interested in this, but the average age of the first people who took it up was 29.

And so we looked some more into doing things differently. Why do we want to know what time you came to work? What time you left, etc? Can’t we exchange this for a contract for buying something from you, some kind of work?

Why are we building these headquarters? Is it not an ego issue that we want to look solid and big and important? But we’re dragging you two hours across town because of it?

We also asked, how do we recruit people? We changed to telling potential recruits, we’re not going to have two or three interviews; nor are you going to be married to us for life. That’s not how we do the rest of our lives.

We said, whoever is interested in interviewing you will show up. And we’ll see what happens out of the intuition that rises from that, instead of just filling out the form. Then, come back and spend an afternoon or a whole day, talk to anybody you want. Make sure we are the bride you thought we were and not all the bullshit we put into our own ads.

Slowly we changed to a process where we said things like, we don’t want anyone to be a leader in the company if they haven’t been interviewed and approved by their future subordinates. Also, every six months, everyone gets evaluated, anonymously, as a leader. And this determines whether they should continue in that leadership position. If they don’t have a 70 or 80% grade, they don’t stay, which is probably the reason why I haven’t been CEO for over 10 years.

And 25 years ago, we started asking other questions. For instance, why can’t people set their own salaries? What do they need to know to do that?

So we decided to give people these three pieces of information. In the cafeteria we have a computer where you can ask what someone spent, how much someone makes, what they make in benefits, what the company makes, what the margins are, and so forth.

And so, the question we were asking was, how can we be taking care of people? People are the only thing we have. We can’t have a department that runs after people and looks after people. We started finding that this worked in the company

But the main thing that I was looking for was, how do you set up for wisdom?

We’ve come from the industrial revolution, and the age of information and knowledge, but we’re not any closer to the age of wisdom.

How we design, how do we organize, for more wisdom?

So we’d say things like, let’s agree that you’re going to sell 57 widgets per week. If you sell them by Wednesday, please go to the beach and start working again on Monday. Don’t create a problem for us, for manufacturing, because then we have to buy new companies – we would have to do all kinds of things because you sold too many widgets.

In the process of looking for wisdom we wanted people to know everything, and we wanted to be truly democratic about the way we ran things. So our board had two seats open with the same voting rights, for the first two people who showed up. So we had cleaning ladies voting in a board meeting, which had a lot of other very important people in suits and ties. The fact is that they kept us honest.

And we set up a foundation, which now has had for 11 years, three schools, where we started asking the same questions, how do you redesign a school for wisdom? MOST OF THE REST OF THE ADDRESS WAS ABOUT THESE SCHOOLS – EDITOR.

Semler was asked whether the percentage of businesses which had taken up his ideas was low; but when they did, did he feel triumphant?

He replied: it happens (that other businesses take up these ideas). It happened recently with Richard Branson in one aspect, and a little bit with Netflix. But I don’t think it’s very important. I’d like to see it happen maybe a little bit.

But the fact is that it takes a leap of faith about losing control. And almost nobody who is in control is ready to take leaps of faith. It will have to come from kids and other people who are starting companies in a different way.

The evidence is that this works, but people just don’t have the courage. They don’t even have the incentive. You’re running a company with a 90-day mandate.  If you’re not good in 90 days, you’re out. And I say, “Here’s a great programme that, in less than one generation …” And they say, “Get out of here.”

I’ve never been very evangelical about these things. We put it out there. Suddenly, you find people – there’s a group in Japan which has 120 companies called the Semlerists (which scares me). And there is a group in Holland that has 600 small companies.

It’s something that will flourish on its own. Part of it will be wrong, and it doesn’t matter. This will find its own place.

And I’m afraid someone will say, this is so good you’ve got to do this, let’s set up a system and put lots of money into it and then people will do it no matter what.

How many people do you know who on their death beds said, boy, I wish I had spent more time at the office? So there’s a whole thing of having the courage now – not in a week, not in two months, not when you find out you have some disease – to say, no, what am I doing this for?