That’s How It Turned Out To Be, But I Had To Make It Work

Oppressor-victim narratives are prevalent currently. Victimhood is particularly seductive (and worth clinging to) because it calls for the morally-turpid oppressor to change … 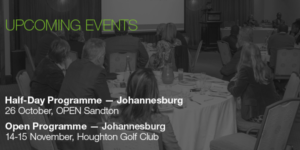 Question: Can a Legitimate Leadership intervention succeed in an organisation without the full commitment of its executive?

Answer:  To cascade Legitimate Leadership principles and practices rigorously down an organisation is the optimal situation. However, an intervention can succeed when this is not the case. Experience has shown that in a large organisation the commitment of senior management outweighs the importance of the commitment of the executive. Because legitimate leadership is a choice, the catalyst for change can be at any level …  Read the full answer by clicking here

Some seemingly small changes made in the way a top-performing regional manager in a South African apparel retail group works with and communicates to her store managers have produced some dramatic results. The regional manager says she has been in retail for 20 years and seen a number of store turnarounds – but nothing as dramatic as this.

The changes she made followed Legitimate Leadership training in the group in 2018.

In mid-2017, a new store was opened in her area. The store proved problematic because it was only managing to open about six new customer accounts every month.

The regional manager appointed a new store manager in 2018, but in the first month of her service, the new manager struggled in the same way that the previous manager had.

More specifically, my experience in organisations over the last two decades suggests that to realise the full impact that a Legitimate Leadership intervention can make on an individual, team and organisational excellence necessitates five factors.

PODCAST: ‘THAT’S HOW IT TURNED OUT TO BE, BUT I HAD TO MAKE IT WORK’

COMMENT ON THIS PODCAST BY  TEIGUE PAYNE, LEGITIMATE LEADERSHIP: Oppressor-victim narratives are prevalent currently. Victimhood is particularly seductive (and worth clinging to) because it calls for the morally-turpid oppressor to change, but calls for no change from the innocent victim. Examples of victim narratives are: the wealthy oppress the workers; men oppress woman; colonisers oppress the colonised; white people oppressed people of colour; straight people oppress gay people; beneficiaries of affirmative action oppress non-beneficiaries; etc, etc. There is of course much overarching truth in these narratives. Kgothatso Montjane is aware of overarching narratives, but she chooses to focus on more positive matters. In the modern Western world, where slavery and the gulag do not exist, most people can make some of the kind of choices that Kgothatso Montjane has made.

OUR SUMMARY OF THIS PODCAST: Kgothatso Montjane competed at this year’s Women’s Wheelchair Tennis Championships at Wimbledon. She was the first African to compete in this event. Although she did not qualify for normal entry (having gained entry on a wildcard), and although she had not played on grass before and she did not have a coach, she reached the semi-finals.

Shortly before the Wimbledon event, the normal sponsor of South African wheelchair tennis withdrew. Montjane herself had insufficient financial resources but a late contribution allowed her to travel to Wimbledon. However, the funds were insufficient for her coach to go with her.

She says that because of financial problems she thought that this Wimbledon would be her last tournament. “So I wanted to go and make the best of it and enjoy the experience … It was a dream come true and at that moment I felt like even if I quit, I would be happy because I completed the four slams.”

READ OUR FULL SUMMARY OF THIS PODCAST BY CLICKING HERE