Trust, Loyalty And Willingness When Overtime Without Pay Is Needed

“I am going to be asking you all to work really hard over the next few weeks. This is going to involve long hours, late nights, as well as weekend time – and I cannot pay you …

What ‘Care’ Requires Of Leaders When Their People Have Personal Problems

More than perhaps at any other time, a leader’s sincerity is put to the test when her people have problems of a personal nature … 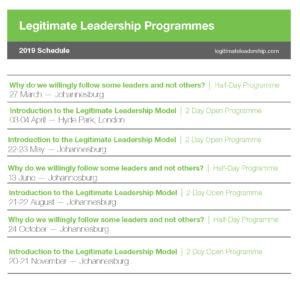 Question: What is Legitimate Leadership’s view of the value of detailed planning?

Answer: Having studied information technology (IT), and been an IT consultant, I was previously a firm believer in the power of detailed planning. I believed that the better you can predict the future, the better would be your end result.

However, as I came to learn repeatedly, predicting the future has its challenges! In fact I learned that a single-minded focus on achieving the predefined end result by following the predefined detailed plan often created more problems than it solved. And the more the detail, the more plentiful the assumptions. And the more plentiful the assumptions, the greater the chance of the future not turning out as it was supposed to!

Today I believe that one should keep the result in mind, but understand that it is actually just the outcome reached because of the incremental contributions made …  Read the full answer by clicking here

VIGNETTE CASE STUDY: TRUST, LOYALTY AND WILLINGNESS WHEN OVERTIME WITHOUT PAY IS NEEDED

“I am going to be asking you all to work really hard over the next few weeks. This is going to involve long hours, late nights, as well as weekend time – and I cannot pay you for any of the extra time you are going to spend at work. Furthermore, not many people will notice how hard we have worked.”

The view of the average manager is that employees are seldom happy to be told the above, and so the only way to get them to comply is to incentivise them, costing money, or compel them with threats of discipline if they don’t turn up for work.

The above comments were part of a briefing that an IT manager for one of our clients gave his staff as the organisation prepared for a large office move. His team was to be responsible for the IT infrastructure-related work that was to make the move successful.

It has been shown beyond doubt that only when managers, individually and collectively, have a genuine concern for their people as human beings and enable them to realise the best in themselves will their people be willing. It is two drops of essence, care and growth, which gives those in authority legitimacy – not money.

More specifically legitimacy as a leader is earned only through the provision of:

MEANS – people are provided with an enabling environment in which to contribute.

ABILITY – people are continually increasing their know-how and know why.

The leadership outputs of Care, Means, Ability and Accountability in turn accrue or result from 16 leadership practices.

COMMENT ON THIS VIDEO BY WENDY LAMBOURNE, LEGITIMATE LEADERSHIP: One of the most attractive qualities in a leader is humility. By that is meant ‘not that they think less of themselves but that they think of themselves less often’ – that they accord significance to those who report to them rather than themselves. This is equally true of all members of a team. Teams succeed to the degree to which individuals in the team concern themselves with helping others to shine rather than being the ones to shine.

OUR TRANSCRIPT OF THIS VIDEO: I get reminded of the power of the group every day. And every day there’s some type a knock-back where you learn something new and you’re humbled by all the things that you don’t know.

I hire the best people I can find. If they’re not better than me at every job type then I have not served myself well as a leader of consequence and if I’m not slightly embarrassed by all the things they know that I don’t know, I’m not the right leader for that group.

So I think that’s the key to this humility: to have the self-confidence and the appreciation for human capital and celebrate talent, love talent. And let that talent be free.

And every day I learn something new from somebody that knows so much more than me. And that’s what makes great teams.

READ THE FULL SUMMARY OF THIS VIDEO BY CLICKING HERE