Question of the Month: What is the appropriate action for a leader to take when an employee underperforms, or performs according to expectation, or performs well above expectation?

A hallmark of a leader is that he takes appropriate rather than expedient action. He sets the example for his people by doing the right thing and motivating them to behave appropriately …

Singular Systems, which was founded in 2002 in Johannesburg, South Africa, is a bespoke software provider with a total staff today across its three sites of about 200 …

Video: Just Cause (One Of Simon Sinek’s 5 Practices Of Leadership) 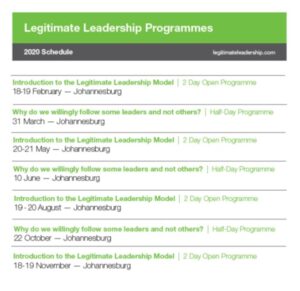 Answer: A hallmark of a leader is that he takes appropriate rather than expedient action. He sets the example for his people by doing the right thing and motivating them to behave appropriately.

When an employee has been a ‘Superstar’ and made an exceptional contribution, the “appropriate” leader responds by finding a way to reward the employee for this – because it is only just that such a person should receive demonstrably more than those who have not gone the extra mile.

When an employee has been a “Solid Citizen”, the appropriate leader acknowledges the contribution made and thanks the person for doing a good job.

When an employee has performed below standard, the appropriate leader investigates why this is the case and takes the appropriate action. If the employee lacks the means to do the job, the means is provided; if the employee lacks knowledge or ability, training is provided or the person is removed from the role or the work is redesigned. But if the underperformance is due to carelessness, the employee is censured and careful work is insisted upon; and if the underperformance has been due to deliberate malevolence, the employee is disciplined and sanctioned.

In all three cases (Superstar, Solid Citizen and Underperformer), the appropriate leader ensures that the means and ability are available for the employee to maintain and raise the bar on her performance.
By contrast, the inappropriate leader’s response … Read the full answer by clicking here

Singular Systems, which was founded in 2002 in Johannesburg, South Africa, is a bespoke software provider with a total staff today across its three sites of about 200. The company was started by Anthony Wilmot and the current CEO, Nicholas Kruiskamp, and has a family-business ethos.

Luckily, when the company embarked on reinventing its pre-existing performance management system in 2017, there was a fair degree of trust already within its culture. “Any process you could think of would have zero impact if it didn’t have trust,” says Dave Elliott, an executive of Singular Systems.

Another essential was that care and growth of employees as a value had to be accepted by the top leadership.

Singular Systems applied principles from Legitimate Leadership in designing its new system. Thereafter Singular Systems evolved its own system in its three separate offices (in Cape Town, Johannesburg and London).

VIDEO: HAVE A JUST CAUSE (THE FIRST OF SIMON SINEK’S  5 PRACTICES OF LEADERSHIP)

By Simon Sinek, American author on leadership and motivational speaker.

COMMENT BY WENDY LAMBOURNE, LEGITIMATE LEADERSHIP, ON THIS VIDEO: Legitimate Leadership believes that organizations succeed to the degree to which its members are prepared to go above and beyond in pursuit of its objectives. The leadership challenge therefore is to solicit peoples’ willingness to give unconditionally to the goals and objectives of the organization. What solicits peoples’ willingness, we believe, is three things: PURPOSE, PERSON, PASSION. Of the three, Purpose relates to what Simon Sinek calls Just Cause. Simon Sinek, and Legitimate Leadership. believe that people will only go the extra mile for something worth suspending their self-interest for. Simon Sinek calls this a Just Cause; Legitimate Leadership calls it the Benevolent Intent of the enterprise, or its Noble Purpose. Giving people a ‘why’ which is about increasing the ROI for shareholders is not only not motivating, it tends to engender hostility. This is because this ‘why‘ turns employees into people who are being ‘taken from’ to enrich the owners of the business. What solicits in people a willingness to go above and beyond, to sacrifice their own interests, is a ‘why ‘which is bigger than themselves and is about making a contribution to others and making the world a better place. It is a ‘why‘ which is about adding value to a customer. This ‘why‘ has nothing to do with the company’s products and services – it is all about what the company makes or does FOR its customers. Articulating and communicating the organization’s Benevolent Intent is the job of the leaders of the company. Ensuring that everyone in the company then lives up to its Noble Purpose is also a leadership issue. Leaders need to believe in the Just Cause and dedicate themselves to it. They need to make sacrifices in the interests of furthering that cause. Then, and only then, will their people do likewise.

OUR SUMMARY OF THIS VIDEO: Does your organization offer your people a cause so just that they would be willing to sacrifice themselves and their interests in order to advance that cause?

An example of a Just Cause was the United States’ Declaration of Independence. The founding fathers wrote down a reason why they wanted to go to war and create their own country. All men are created equal, they said – endowed with unalienable rights amongst which include life liberty and the pursuit of happiness. In other words they presented an ideal vision of a future state that did not yet exist – an ideal so inspiring that they were willing to commit their honor, their fortunes and their lives in order to advance it.

They will never actually achieve that ideal but they will die trying – and that is the point.